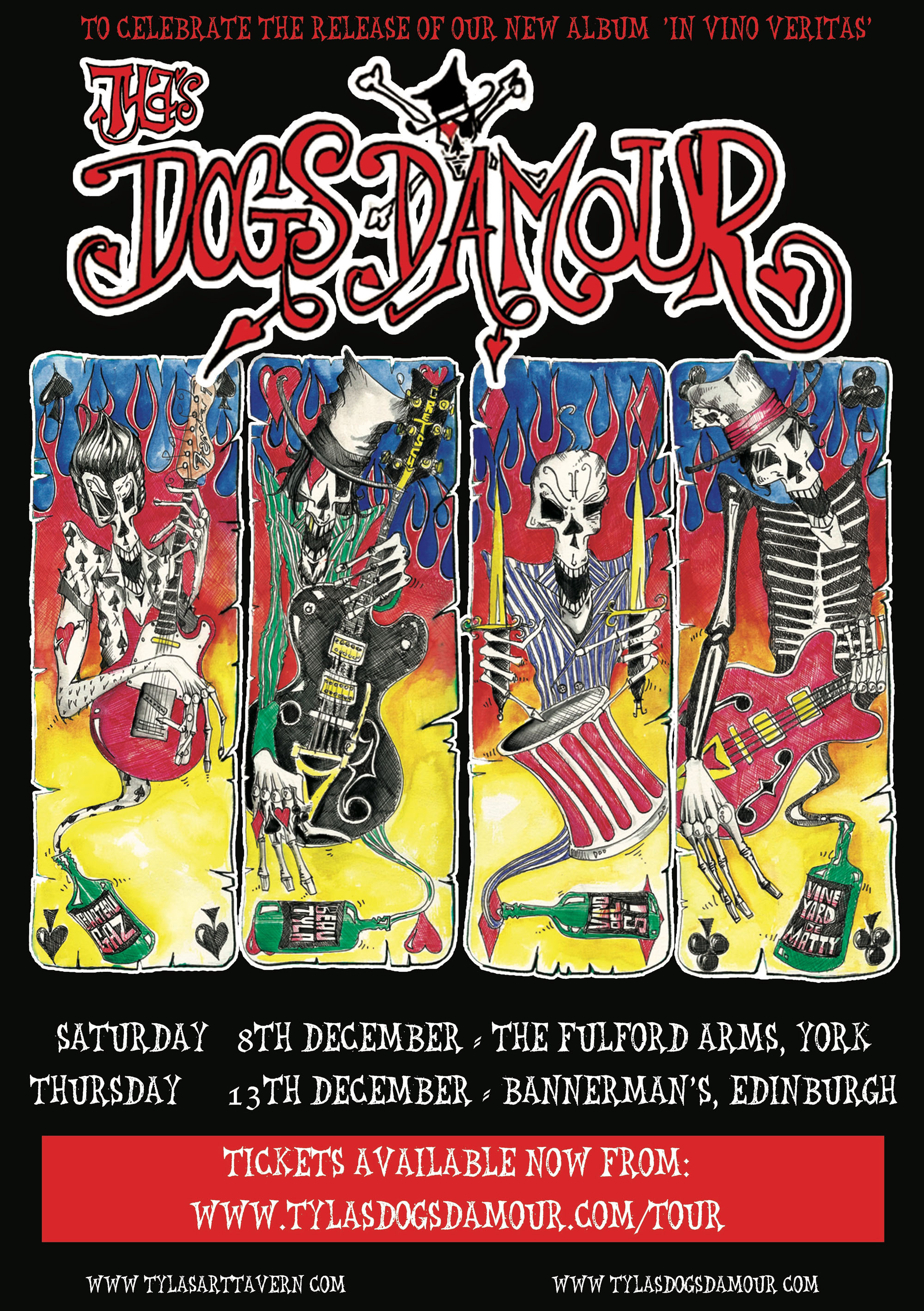 Tonight was the second of only two album release gigs to promote the new Tyla’s Dogs D’Amour album ‘In Vino Veritas’ (the first having been in York last week). Cutting to the chase, I can honestly say that in many years of gig-going I haven’t seen or heard new material go down so well with an audience. As gig-goers we’ve all been there before – you go to see a band or singer and find yourself patiently listening to newer material, but just waiting to hear your older favourites. Well, this wasn’t one of those nights.

Approaching Christmas and the end of the week, later stage times were set which only served to heighten anticipation. Support act, and bass player from Tyla’s Dogs D’Amour, Matty James took to the stage just before 9.00pm and played an acoustic set of his solo material. While I wasn’t familiar with this, a sizable number of the crowd were and sang along with him. I will also be getting to know his work very soon if songs such as ‘Same Old Me (Brand New You)’, ‘Sticks & Stones’, ‘Gunpowder’ and new single ‘Rosary’ are anything to go by.

Moving on to the main attraction and the reason why we were all there. Collectively – Tyla’s Dogs D’Amour. Individually – Tyla on vocals and guitar, Gary Pennick on guitar, Matty James on bass and Simon Hanson on drums.

Taking to the stage, the set was split into two – a series of songs off of the new album followed by some older fan favourites from the classic era Dogs D’Amour albums. This approach could easily have backfired if fans had only been here for the older songs, but it didn’t and they weren’t.

As an album opener ‘111’ signals a rockier intent than I have heard from Tyla and his band mates in some years. But played live it is blistering, heavier and played with a sense of urgency which had the audience moving from the first few bars. The first single ‘Black Confetti’ followed before leading into ‘Bottle of Red’. If ever there was a drinking song this is it and the crowd greeted it and sang along with it like an old friend or as only old friends can when over-indulging.

As a songwriter, Tyla’s sentimental side is never far beneath the surface. ‘I Don’t Love Anyone’ is a beautiful song and showcased this side to his character before the pace picked up with ‘Bloodline’ and ‘Chicago Typewriter’. But, for me, the final new song played, ‘Everything To Me’, was both the best new track played live and also my favourite on the new album. It’s got the lot – sentiment (in buckets), a big chorus, vintage-style backing vocals, rocking guitars, brooding bass line and punchy drums. What’s not to love?

For a number of the songs the band were also joined on stage by a local saxophone player, James, who helped them re-create their studio sound more accurately and provided another dimension to the band’s live sound. While looking as though he hadn’t been born when the Dogs were at their height, he did a great job and was a very welcome addition to the evening.

Having showcased a selection of songs from the new album, the band moved on to playing their older material. From the sax opening to ‘Wait Until I’m Dead’, Tyla could have taken a break from vocal duties as the crowd assumed responsibility for delivering both lead and backing vocals. ‘Drunk Like Me’, ‘Last Bandit’ and ‘Billy Two Rivers’ followed in quick and glorious succession, and I wouldn’t be surprised if the low-arched ceiling in Bannerman’s is a few feet higher this morning with many in the audience nursing sore heads and lost voices.

And here my review of the gig unfortunately ends, reflecting the experience of fans attending gigs from outside town when later stage times or curfews can result in the choice of leaving before the end to catch the last bus/train or facing a £40+ taxi fare home. But, having seen the original set list, which the band had warned me would change, there were some corkers planned in there which would only have taken the gig to an even higher level as it approached it’s close.

As an album launch show, the gig was a great success. But it wasn’t without it’s technical problems. As luck would have it, Tyla and Gary both broke guitar strings at the same time and while a third guitar was also out of use. But, as seasoned professionals and amongst friends, they took this in their stride, simply stopped the gig for 5 minutes and set about re-stringing their instruments while Simon entertained the crowd with his East 17 tribute (of sorts). Musically, the band were solid. And vocally, Tyla, in the words of a gig-going friend last night, “like Tom Waits has found the voice he’s been working towards all these years”.

While many established bands rely primarily on playing their back catalogues, with less fan demand for their newer material, ‘In Vino Veritas’ bucks this trend. It’s release signals a band rejuvenated, provides an album which more than earns its place alongside their classic output and is well into Album of the Year territory. Speaking to the band before the gig (look out for our interview with Tyla and Simon coming soon) it was clear that they hadn’t expected this reaction. But they deserve it.

If you haven’t bought ‘In Vino Veritas’ yet, you should. Buy it, don’t stream it – the bands hardly receive anything in return. Hear for yourself what all the fuss is about. And if you get a chance to see Tyla’s Dogs D’Amour when they are next playing live, go see them. You will not be disappointed. Great entertainment.