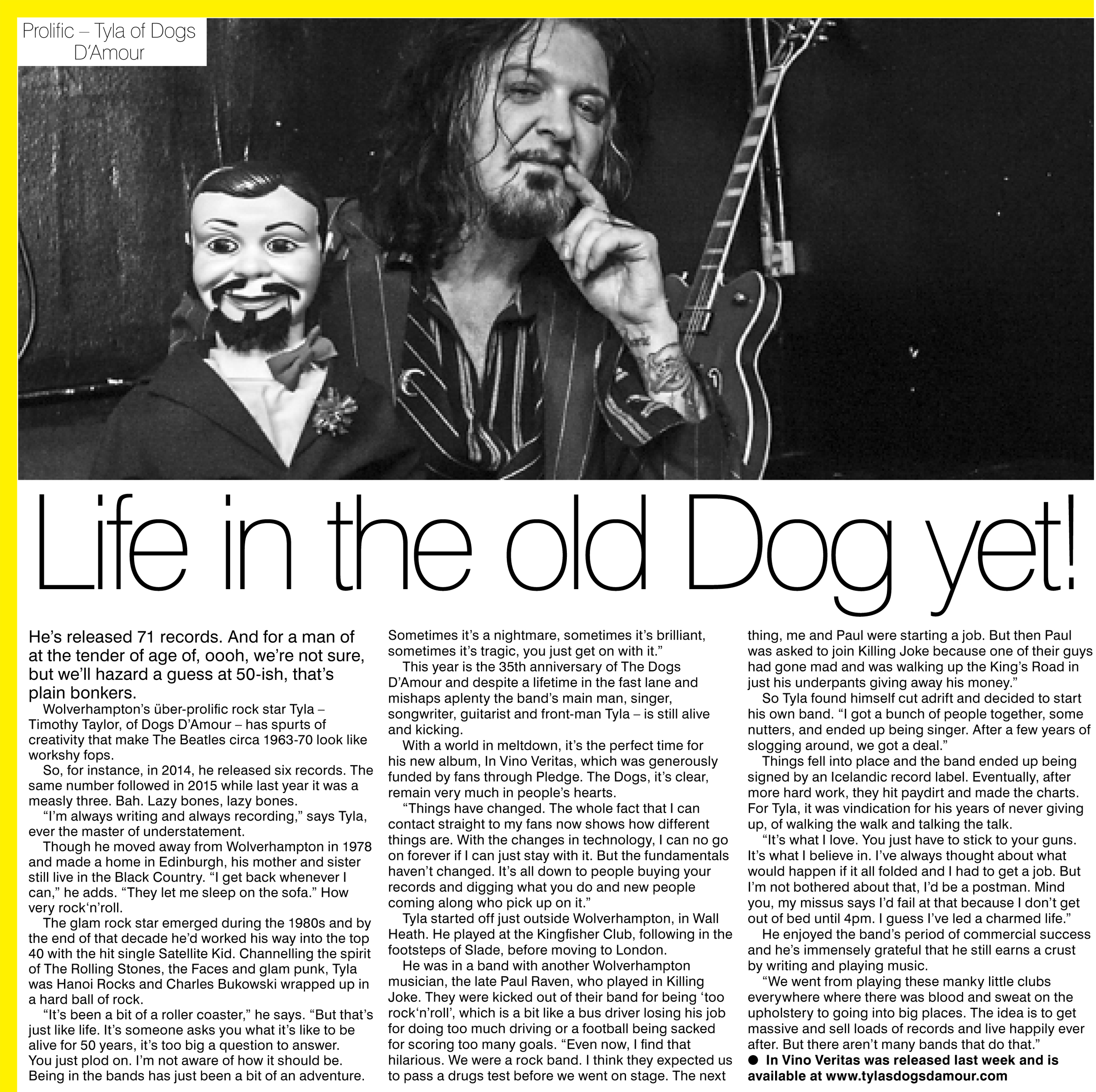 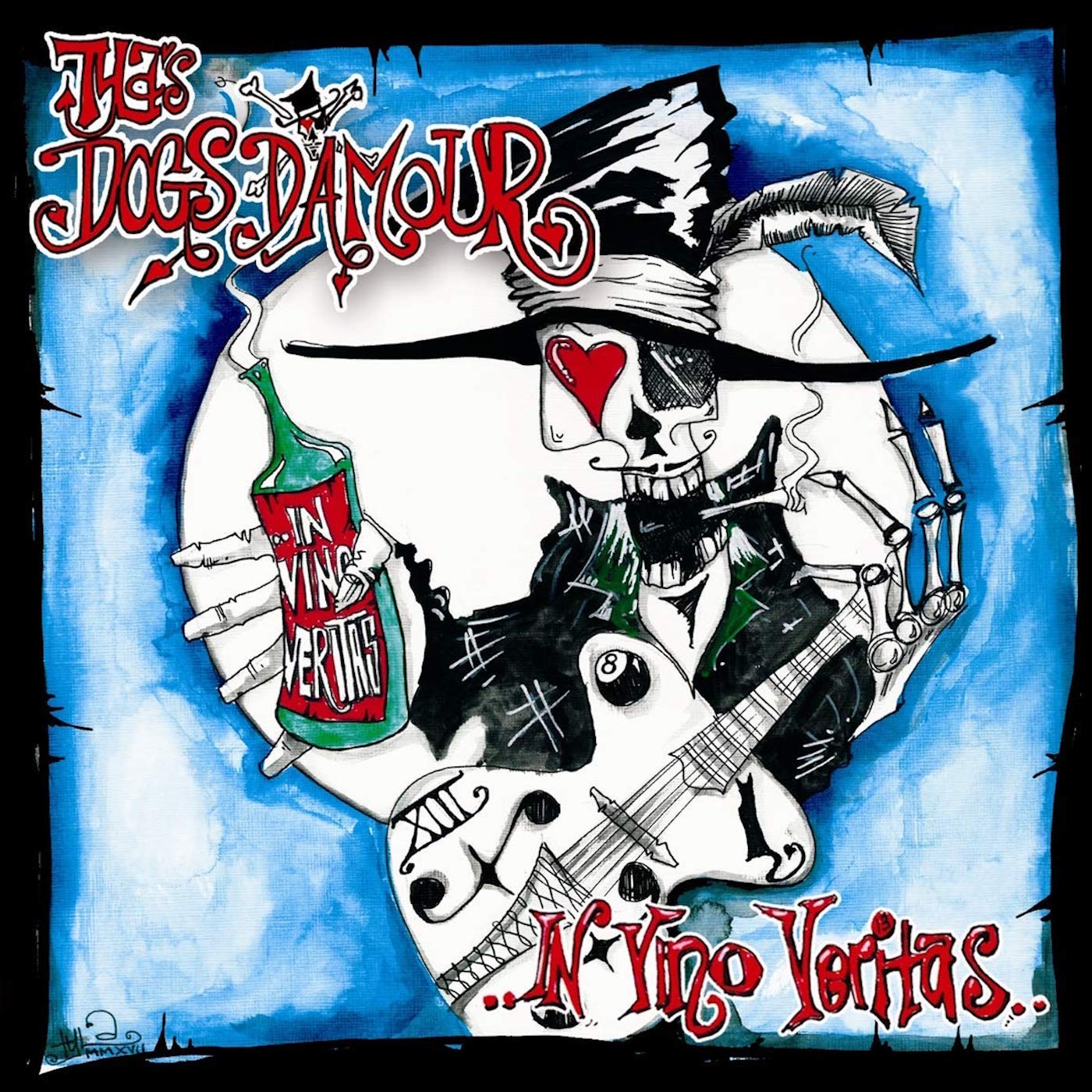 There’s a line on the press release that came with “In Vino Veritas”, that frankly shocked me: “2018 is the 35th anniversary of The Dogs D’Amour,” It said. Then I thought about it. It really was the late 1980s where I bought an album called “In The Dynamite Jet Saloon” that showed me a different way.

A way that said you could dress like Faster Pussycat, but didn’t have to sound like them, a way that said you could put poetry to rock n roll, and a way that showed me that not everything great had to come from America (in fact Tyla, the bands frontman didn’t live far from me, in Wolverhampton). And a little later on with their “Graveyard Of Empty Bottles” record they – along with Springsteen’s “Nebraska” – showed me that acoustic music could rule too.

It’s their first album for a while too – 13 years apparently since “Let Sleeping Dogs…” came out – and there’s always thought when one of your favourite bands releases something after so long: what’s it going to be like? I hope it doesn’t suck.

By the time that one is done he’s also come out with the genuine classic line: “I’ve got a paranoid psychiatrist, he’s got it in for both of me” and its pretty damn obvious that this one of the great Dogs albums.

“Black Confetti” (helpfully rhymed with “razor sharp machete”) is the kind of world-weary balladry – but always with the guitars turned up loud – that DD at their best always did, and the saxophone solo here is just perfect.

“Bloodline” comes in with the same bassline as “Ballroom Blitz” and the man at the back as a matter of fact, “likes me wine” like some folky troubadour, a theme he continues in the next song too. “Bottle Of Red” drenched in sax. Timeless rock n roll in the vein of “The River” album, or “Dancing In The Moonlight”, it sees Tyla at his perky best at the end: “I might have to manage a bit of pinot grigio, though, if there’s none left….” He offers to no one in particular.

“Everything To Me” has some gorgeous organ to go with its loose-limbed Stones-type guitar, “Chicago Typewriter” is a little more urgent, as befits a track that begins with machine gun fire and sirens, while “I Don’t Love Anyone” is basically the sound of Tyla’s career bottled in three minutes. A little like The Quireboys, but with that voice, the one that only Tyla has and no one can copy. It is just perfect.

The title track is a big old ballad, a brilliant one too, “Monster” has a kind of jazz flavour, not too far from the work of Urban Voodoo Machine – the harmonica adding a touch of desperation – while “Movie Star” sees him dusting off the playbook of his early career and emerging with something that both embraces the past and celebrates the present.

“In Vino Veritas” (and I am no Latin Scholar, so relied on wiki for this, so it may be bullshit) means “In Wine Lies The Truth”. Whether that’s the case, as a teetotaller I couldn’t say. What I do know is this very possibly the best Dog’s D’Amour album since “Straight?!” in 1990 – and that is surely something we can all raise a toast to.